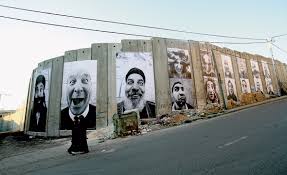 JR is a french artist and photographer known widely as a ‘street artist’ but not working in the traditional graffiti medium yet he uses the streets as his gallery pasting oversized black and white portraits on the streets of various locations. The most powerful part of JRs work is the locations, while his photos often challenge preconceptions of a certain people its the placement of the images that provide the ultimate message.

I first was introduced to his work through his project Face- 2Face, on either side of the seperation wall between Israel and Palestine the artist pasted portraits of men and women from both countries who do the same jobs laughing, pulling funny faces, being human. The project attempts to show that beyond the wall that divides them the people are actually no different. This is another example of a positive way to tack- le division. I found within this project a struggle in deciding whether to show the reality of exclusion and division or to challenge perceptions and show a beauty of intergration so projects like this are very inspiring. Relevant to this project though in a different way is JR’s project ‘Unframed’, the artist was invited to work on Ellis Island, an island next to the Stat- ue of Liberty that is symbolic as the gateway for 12 million immigrants between 1892 and 1954. Using his pasted photos JR brings alive the memories of the place. My favourite im- age shown opposite is a family posted in the window of an abandoned building, the window faces the statue of liberty so u see them looking out to their dreams and hopes, its very meaningful and poetic and for a moment gives u a glimpse of millions of peoples journeys.

JRs images confront audiences, they give you no choice but to notice them, a lot of the work is capturing images of peo- ple who usually go unseen and placing them in opposing lo- cations, this is something that really resonates with me as an artist and my own ethics and motives. The beauty in his images cant be ignored either, the placement and momunen- tal size can be the focus at times however the realness he captures in people is admirable, the subjects are unguarded and natural. The comfort level of his subjects with him is un- believable and you can see it in each photo, I think this says alot about the artist and his own soul.

Published by Never heard of her

View all posts by Never heard of her